As of May 2017, the Montgomery County Council has signed off on $7.5 million to design the Rt. 29 BRT line and to continuing studying BRT along MD 355. The Montgomery County Department of Transportation has also been awarded $10 million in TIGER grant funds to construct the Rt. 29 BRT line, named “Flash.” It is set to open in 2020. The route is planned from the Burtonsville Park and Ride to Downtown Silver Spring in both dedicated shoulder lanes and mixed traffic. Plans for more dedicated space in the southern portion of the corridor are underway. This will be the first BRT line in Montgomery County.

Here are some additional great resources to learn more about our work for BRT in Montgomery County:

Ted Van Houten | February 14, 2013
On the heels of a report suggesting Montgomery County's Bus Rapid Transit plans are too ambitious, county planners are recommending reducing the number of lines and using dedicated bus lanes across a smaller portion of the system. Photo by dan reed! on Flickr. They presented these recommendations last night at
Read More

Ted Van Houten | February 5, 2013
D.C.-based nonprofit the Coalition for Smarter Growth has joined the cause for transportation dollars to build the Purple Line and Bus Rapid Transit system, both of which supporters say would ease congestion in Bethesda, BethesdaNow.com reported. The nonprofit, which until now has dealt largely with Northern Virginia transportation and sprawl
Read More 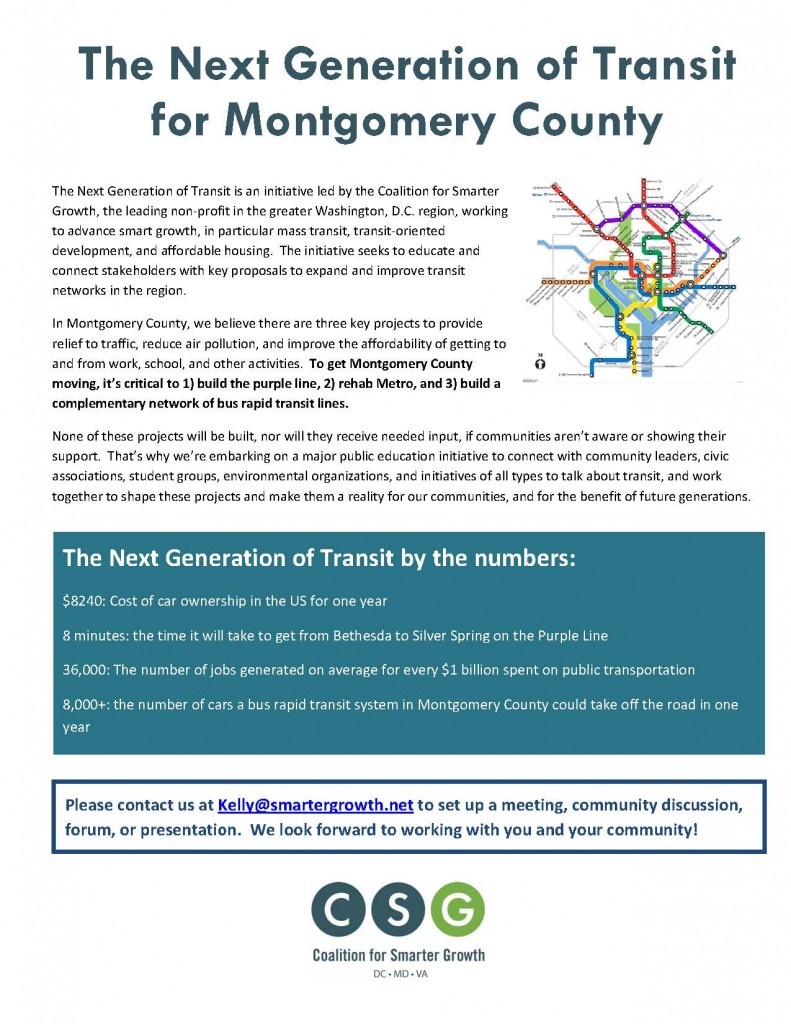 The Next Generation of Transit: the Key to Montgomery’s Green Future

Ted Van Houten | February 4, 2013
Join us for the Coalition for Smarter Growth’s panel discussion on the need to “invest in transit to improve our quality of life, protect our open spaces, and do our part in stopping climate change,” on Wednesday. February 13th from 6-8 pm at the Silver Spring Civic Building. The Planning
Read More

Ted Van Houten | February 4, 2013
A new group is joining the cause for transportation dollars to build the Purple Line light rail and Bus Rapid Transit system, both of which supporters say would ease congestion in Bethesda. The Coalition for Smarter Growth, a D.C.-based nonprofit that until now has dealt largely with North Virginia transportation
Read More

Joe Wisniewski | January 15, 2013
The Coalition for Smarter Growth supports the supplemental request by the County Executive for $1 million to further advance the proposed Rapid Transit System. We believe that the request is focused on the important implementation issues including service planning, integration with RideOn and Metrobus, bike/ped access, transit signal prioritization, organizational
Read More