Nearly six months since its long-awaited debut, the District’s first streetcar line in more than half a century is quietly exceeding early ridership projections while avoiding the kinds of mishaps that have placed the Metrorail system under constant and intense scrutiny. Although not without its own issues to iron out, the 2.2-mile line in Northeast Washington is surpassing the low expectations that resulted from years of ad hoc planning, project delays, cost overruns, and a degree of public apathy.

“So far we’ve been doing quite well. The running times have improved. I think our customers are pleased with the service. The vehicles are being maintained properly. And we haven’t had any safety incidents,” said Leif Dormsjo, the director of the District Department of Transportation, in an interview aboard a well air conditioned streetcar on a hot August afternoon.

D.C.’s top transportation official believes the line’s largely drama-free start is the result of the careful approach he took after inheriting a host of design and construction problems 20 months ago. Dormsjo hit the reset button on the project, bringing in outside experts to evaluate its shortcomings and to establish a better relationship with local safety oversight officials who ultimately had to approve the start of passenger service.

At the end of the month, DDOT is expected to make two decisions that could improve streetcar service: whether 1) to run streetcars more frequently and 2) to operate seven days per week. Sundays are currently set aside for maintenance.

Less than 20 minutes end to end

From the top of the Hopscotch Bridge outside Union Station in the west to the intersection of Benning Road and Oklahoma Avenue Northeast in the east, the average streetcar trip is taking less than 20 minutes — an improvement from the early days of operations, said Dormsjo.

“We’ve seen improvements in the running time since we started in February. We’re about 17 minutes end to end in the early morning hours,” he said.

In fact, the longest trips are during middays instead of rush hour. And more people are riding in the middle of the day and late afternoons than in the morning, although D.C. Streetcar ridership is more evenly spread throughout the day compared to the typical mass transit system that sees big peaks during mornings and afternoons.

DDOT data show the average trip takes about nineteen and a half minutes between 10 a.m. and 3 p.m.; rush hour trips are anywhere from 30 to 90 seconds shorter. The frequency of delivery trucks and lunch hour visitors along the corridor may be slowing streetcars down during middays, Dormsjo said.

That is the assessment of Kenny Cook, the manager of a Lebanese eatery at the corner of H and 5th Streets.

“There are a lot of issues with parking. There are a lot of issues with delivery trucks. If you park one millimeter on that red line,” said Cook, referring to the stripe that delineates where cars can safely parallel park, “it shuts down traffic and you have to get a tow truck, and a tow truck shuts down the other lane because it has to back in and pull the car out.”

Despite some traffic tie ups, Cook rates the streetcar as a positive so far.

“It helps business. It brings people to the business,” said Cook, who added that the streetcar also has dropped off a few unruly passengers whom he had to eject from his restaurant in the late-night hours. He stays open until 3 a.m. on weekends.

Also, westbound trips are consistently longer than eastbound trips by about one minute due to a problem with the traffic signal configuration at the intersection of H and 3rd Streets at the base of the Hopscotch Bridge.

Westbound streetcars often have to wait through an entire signal cycle before they are able to enter the intersection and cross over to the center-running tracks on the bridge.

The sleek, red and gray streetcars are attaining average speeds of about eight miles per hour, somewhat faster than Metro’s significantly more crowded X2 bus line, according to DDOT. In the end, streetcars are at the mercy of traffic congestion in the busy commercial corridor of H Street and Benning Road Northeast. 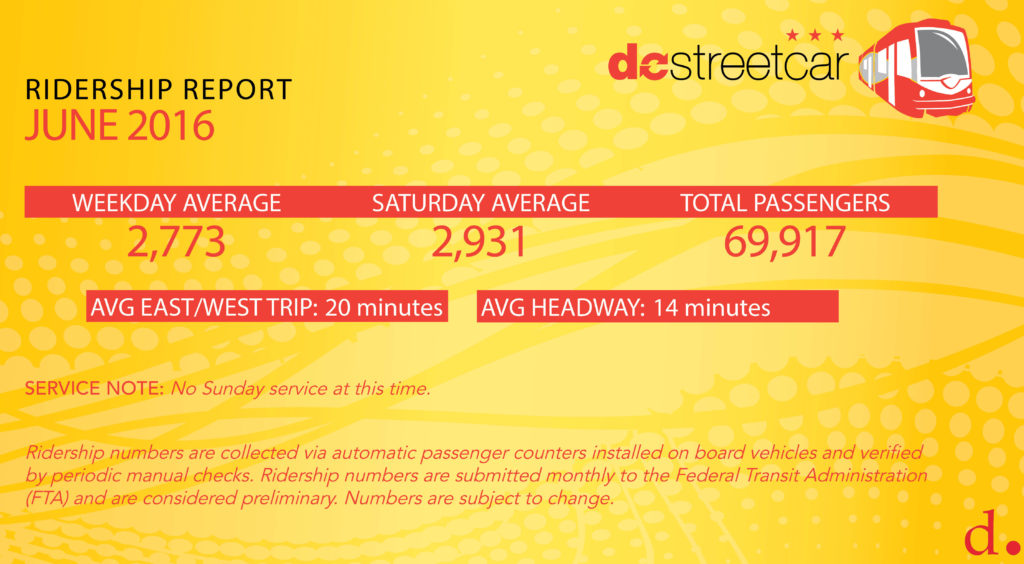 Nearly 70,000 passengers rode D.C.’s five streetcars in June, according to DDOT figures. The weekday average was 2,773, and close to 3,000 passengers boarded streetcars on Saturdays that month. The average headway — the interval between streetcars — was 14 minutes, one minute better than the scheduled headway.

The June figures are higher across the board compared to May, but not quite as good as April’s mark of 3,399 average trips on Saturdays.

To boost ridership over the next six months, DDOT will soon decide whether to shorten headways to 12 minutes. But that change would require having a complete fleet. One of the District’s six streetcars — one of three built by Inekon in the Czech Republic — has yet to see action.

“We’re going to be at full strength very shortly and that is also going to coincide with the decisions that we make about service improvements,” he said.

While pleased with the relatively strong early ridership, DDOT is looking to Kansas City as example of potential growth. The city opened its 2.2-mile streetcar line in May and is already exceeding 6,000 daily riders. The KC Streetcar, which is free to ride, runs every 10-15 minutes and seven days a week.

“We are looking very closely at introducing Sunday service which is something that we have heard a lot from the businesses in the community,” said Dormsjo. “Friday and Saturday are our best days on the H Street line, so we think Sunday could be a real benefit to the businesses and communities along this corridor.”

One decision DDOT will not be ready to make for at least another six months is whether to charge a fare. D.C. Streetcar has been free since opening day on Feb. 27, and for two reasons it may remain free for good.

First, Dormsjo said charging even a minimal fare could hurt ridership. He pointed to Atlanta, where ridership plummeted 48 percent in the first three months of the year after the city started charging $1.00 to ride the 2.7-mile line.

“We’re definitely looking at what other streetcar services have done in terms of their evaluation of fare policy,” said Dormsjo, who said the streetcar’s annual operating expenditures will come to about $8 million.

Second, the cost of collecting the fare could exceed fare revenues, Dorsmjo said, depending on what system the District chooses to install aboard its fleet.

“The streetcar was never intended to be a money-making enterprise in and of itself. The intent is to support economic activity and investment along the corridor. So when you take a broader look at what the streetcar can do to the city’s bottom line it is a net positive, because it is supporting large scale private investment in places that have been neglected for years,” the DDOT chief said.

Dormsjo said if he could do the streetcar over again (he inherited the troubled project when the Bowser administration took office in January 2015) he would build it twice as long as the current 2.2 miles. DDOT is studying plans to extend the initial H Street/Benning Road line east to Ward 7 and west to Georgetown.

Public transit advocates argue the streetcar will not be worth the city’s initial large investment, now well over $200 million, if it is not expanded to additional neighborhoods.

“We really need more transit for District residents to be able to get across the city as we’ve seen with Metro capacity and any number of other challenges,” said Aimee Custis at the Coalition for Smarter Growth. “The next thing we want to see from the streetcar is to help more people get to more places.”

Her group also is calling for shorter headways.

“Right now we are at a 15-minute headway. We need more vehicles, and when you get to a 10-minute headway, it lets people not have to think about the schedule,” Custis said. “We’re not quite there yet with the streetcar.”

DDOT originally planned to run streetcars every 10 minutes along H Street, but aforementioned mechanical problems with one of the six vehicles led to the 15-minute intervals. 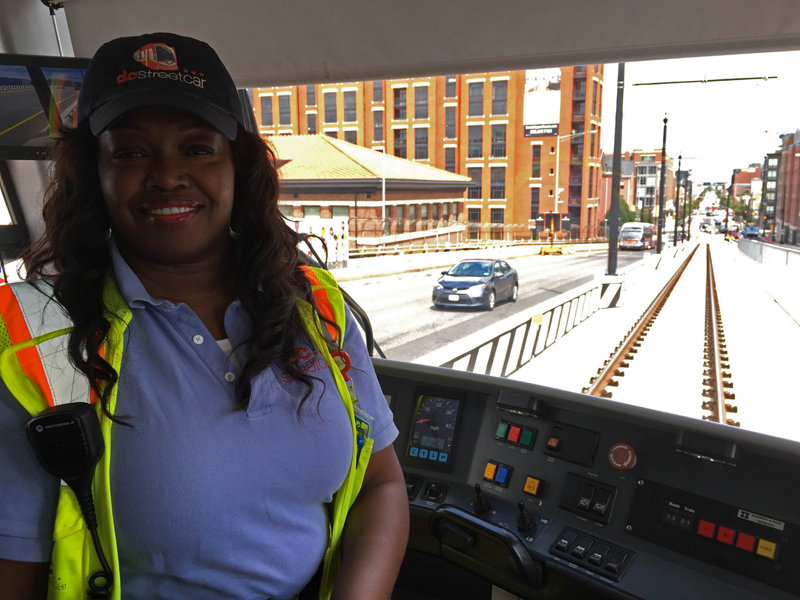 Shariffa Raheem, one of 24 operators hired by a project subcontractor. (Martin Di Caro/WAMU)

The cost of the District’s entire streetcar endeavor, which began when the tracks were laid during a massive streetscape renovation starting in 2008, has climbed to $229 million as of March 8, according to figures requested by WAMU 88.5.

That initial streetscape project on H Street and Benning Road Northeast totaled $15 million. More than $9 million has been spent on at least four corridor studies, and $14 million on operating costs that included months of test runs starting in August 2014 prior to the first six months of passenger service.

But by far the largest expenditures involve the construction of the route and two car barns ($152 million) and project management ($30 million).

Primary contractor Dean Facchina was paid $86 million for the design and construction of the 2.2-mile line ($54 million) as well as two car barn/maintenance yards. The first car barn is temporary and cost $5 million to build. The second, a permanent facility now under construction and due to open next year, has a total cost of $28 million, according to the DDOT documents.

The two projects were split up to mitigate the delay to the start of passenger service caused by the historic landmarking of the Spingarn High School campus, which required a complete redesign of the permanent car barn and maintenance yard with the approval of the Historic Preservation Review Board.

The Kingman Park Civic Association, which filed the application to historically landmark the entire campus, also filed an injunction to stop construction and a lawsuit — all costing the project time and money.

Included in the $229 million price tag is $20 million (to the contractor Fort Myer Construction) for an initial line segment (only 75 percent complete), test track, and temporary maintenance and operation facility in Anacostia — a reminder that the District originally planned to bring back streetcar service to the eastern side of the river first. Those pieces of infrastructure are no longer part of the District’s plans and it is unclear what the city will do with them.

The six streetcars cost $22 million, or about $3.6 million each. Three were built a decade ago by Inekon in the Czech Republic. Three were manufactured by Oregon Iron Works.

D.C. streetcar will cost the District about $8 million to operate, Dormsjo said, with — as of now — no fare revenues coming in to partially offset that cost.

The line has a staff of 53 employees through multiple contractors and subcontractors. Among them are 24 streetcar operators, four service attendants, nine maintenance technicians, three directors of maintenance, operations, and safety, eight supervisors, and a general manager under the firm RDMT, which operates streetcars in two U.S. cities: Washington and Tucson.

RDMT has been paid $10 million to date, according to the DDOT documents.