Skip to content
(202) 675-0016 DC, MD, VA
On Wednesday, June 25th, Communities for Transit and Coalition for Smarter Growth are holding a free, open event from 6:30-8:00 p.m. at Rockville Memorial Library to discuss Montgomery County’s planned 81-mile bus rapid transit (BRT) system. What is bus rapid transit, and how would it affect our city?

When I lived and worked in Bogotá, Colombia, a sprawling, chaotic capital city of 8 million people, there were three ways for me to get to work. The first way, by taxi, was prohibitively expensive as an everyday option for an English teacher like myself. The second way was by traditional bus. Since my classes started at 6 a.m., and were in the industrial zone, forty minutes away from where I lived in the city center, this involved waking up at 4:30 a.m., quickly downing a cup of black coffee, and walking with my housemate and colleague through the empty streets to catch a “collectivo”, a small bus with a set route that only stops at a passenger’s request. At that hour, the bus was always jam-packed with people; my friend and I would often stand in the middle of the bus, unable to see out the windows, having to guess where we were and when to get out. Sometimes I would find myself literally hanging out of the bus, which was too stuffed for the door to close, holding onto the inner hand rails as we careened through the city, my backpack with laptop and course books fully outside the bus’s frame.Luckily, there was that third option: the TransMilenio, a bus rapid transit (BRT) system founded in 2000 that ran all over the city, with more lines and stops than the Washington D.C. area Metro. Bus rapid transit is a system where a bus acts like a metro train or light rail: it has its own lane, stations, and a regular schedule which it sticks to as rigidly as a train would. Yet it is much less expensive to implement, run, and maintain than a metro or train system. In Bogota it is how the majority of non-driving commuters get to work. They entirely avoid the grinding traffic, and a SmartTrip-like card makes it easy for them to predict their travel expenses and enter the station every morning with a minimum of hassle.Rapid Rockville? 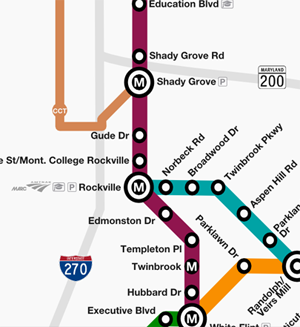 Here in Rockville, MD, we have slightly less stress in our morning commute than the average bogotano. We already have an excellent metro for those who commute to D.C. and northern Virginia, and public buses that are reliable and orderly. We don’t have anarchic traffic and truck-sized potholes to contend with on our drive. Still, with traffic increasing yearly in Rockville and the surrounding region, and with pollution and other environmental concerns needing to be addressed in any long-term plan, there are many who support the addition of BRT to Rockville’s transit profile, envisioning a system integrated with Metro and minimally impactful on those who do not use it.

The Gazette reported in February that Andrew Gunning, assistant director of Rockville’s planning department, is leading a study to assess the BRT possibilities. A potential Rockville BRT would have, according to their article, “three corridors converging at or near the Rockville Metro station on Md. 355. From there, bus lines are planned to run north to Clarksburg, south to the District line and southeast to Wheaton.” The county is also undertaking a study of the 355 corridor to assess its potential.

BRT systems have demonstrably reduced CO2 emissions associated with transportation where they have been implemented. They are also potentially exponentially less expensive than rail systems to implement. Bogotá has been struggling for years with funding issues and construction nightmares (sound familiar?) in its attempt to install a subterranean metro system; but it was able to quickly and cost-effectively implement its BRT, which is presently ranked #1 in the world by the Institute for Transportation and Development Policy (ITDP), according to the New York Times.

A well-integrated BRT system can promote smart, pedestrian-friendly development. It can provide economic opportunities to people who are otherwise underserved in the area of affordable and efficient transportation, and provide greater flexibility of housing location to all residents. It provides individuals with an alternative (or supplementary) option to metro and car, which could alleviate area traffic.

If you are interested in learning and discussing how Rockville can take inspiration from the successful models of other cities and countries, develop a well-integrated and sustainable BRT system to positively impact the environment and our quality of life, and lead the way for a broad U.S. shift toward rapid transit, we encourage you toattend the upcoming event at Rockville Memorial Library, and bring your questions and an open mind.

Update, June 20: The Coalition for Smarter Growth has arranged to have a sign language interpretation for the event at the request of some members of the deaf community in Rockville.